This is the third post in our High-Altitude Cold-Climate Gardening series. You can read the other two by clicking the links below:

Now we will discuss overcoming our soil challenges. Living on a rocky mountainside leaves us with soil that is decomposed granite. It doesn’t retain moisture, or heat, and it is low in nutrients. We also have a lot of pine needles constantly falling from the Ponderosa Pine trees that add too much acidity to the soil.

The natural forest around us consists of plenty of pine trees, with rocky outcroppings scattered around as well as some large piles of huge rocks, some shrubby bushes, and a carpeting of pine needles on the ground. There are few plants and grasses that happily grow in the carpet of needles and the rocky soil. 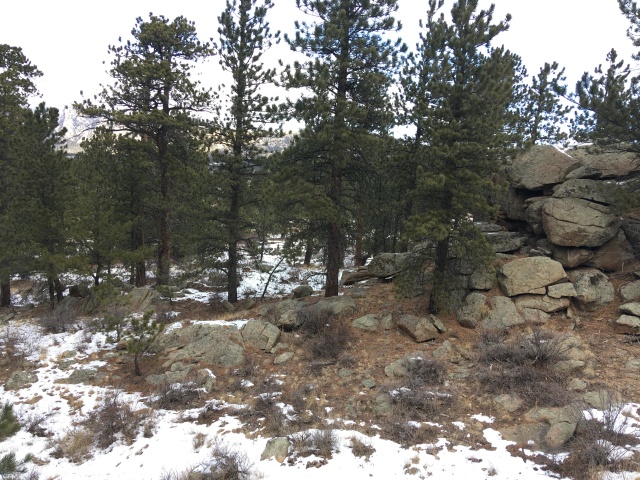 Even though this is a winter photo, you can still see what terrain I am describing. Trees, lots of big rocks, and the scrubby bushes. 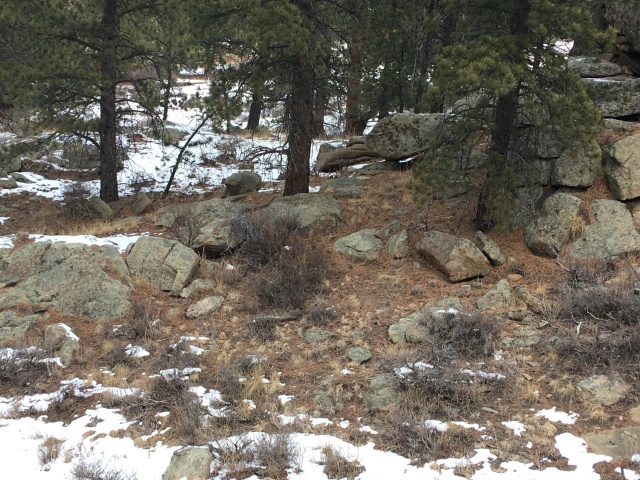 In this closer view you can see the small patches of brown grass and the carpet of dried brown pine needles. In the summer the difference is that the bushes are green with little leaves, and there are small amounts of light green grasses and small plants here and there. But it would never be considered a lush green and growing area due to several factors, especially the soil. Here is one more photo, again taken in winter, but you can see the thin brown grasses, many of which are brown or light green in the summer and still very sparse, and the pine needle carpet, and in the background you can see the trees and rocks.

One last thing I would like to point out in this photo is the shade. See how much shade there is? The abundance of pine trees causes that, and it is also not helpful for growing plants.

As I discussed in the last post, about overcoming the terrain, we terraced our garden area and built raised beds. 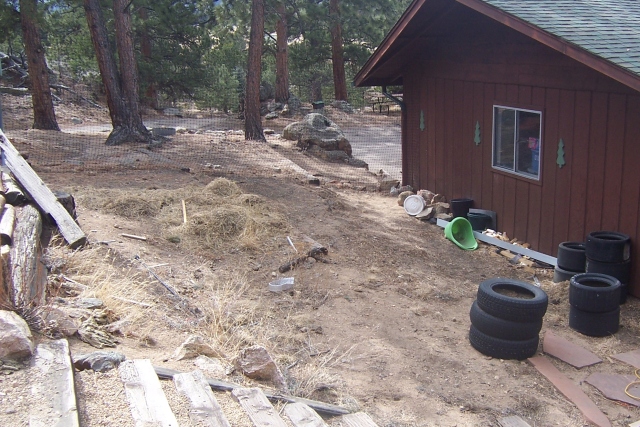 As you can see in the background of this photo, there were 3 big pine trees right along the edge of the garden. There are no pine trees anywhere else around the garden, even behind where I am standing to take the photo. But those 3 trees dropped tons of pine needles into the garden soil (acid) and caused too much shade. So they were eventually removed and we have since then planted a couple of apple trees in that area to provide small amounts of shade and no acidic needles in the soil. Some shade is important for a high-altitude garden because the sun is more intense at high altitude.

The terracing and raised beds were done because of the steep terrain, but it was also done because none of the existing soil is something we want in our garden beds. We needed to completely bring in garden soil. 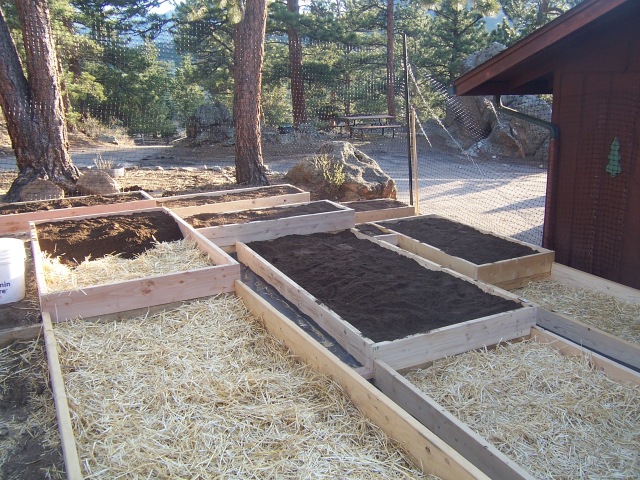 When we were very first starting our garden we didn’t have very much compost of our own from the barnyard compost pile, so we had to buy compost and soil and bring it in to fill the boxes. We started by putting out a layer of straw to help fill the area a bit since we were in need of SO much soil, and then over the years it would break down and add to the soil.

We decided to do a mixture of 1/2 topsoil and 1/2 compost. And we decided to save money and not buy the 40 lb bags, instead buy from the bulk pile. We figured that would also save us having to throw away all the plastic bags since we needed A LOT of soil. Boy was that a disaster!

The compost we got was FULL of trash, mostly little scraps of plastic and glass. I have no idea why it was in there, but we ended up spending a ton of time picking it all out over the next year as we worked in the garden and I was very concerned that one of the children would get cut by a piece of glass while working in the garden.

Thankfully, the next year, when we were ready to add a bunch more soil to the garden because of settling, we had our own compost to add. Each year since then we add an inch or so of new compost on top of the beds and stir it in before we plant in the spring. We have also used all of our own compost to fill the boxes as we built them deeper when we realized that they were too shallow (I discussed that in the previous post).

The soil has gotten better and better over the years. It improves with age and proper care. I have started 3 gardens in 3 different locations over the years as we moved from house to house, and I have learned that it definitely takes time and patience to get the soil just right. The first year is always the worst.

Last garden season was our 6th year growing in this garden and it was the best ever. And as I look back over those six year I can see a consistent upward tilt in how well the garden did, improving each year. Some of that is learning curve of this particular garden plot, but a lot has to do with the soil improving.

So, how do we make our compost? The basic explanation is that we use a mixed livestock barnyard living situation, and we put the compost pile in the barnyard with the animals to allow the chickens to turn the pile for us. Our compost heap consists of kitchen and garden scraps, as well as manure from whatever livestock we have that year (a mix of cattle, goats, sheep, chicken, and rabbits), and the straw, pine shavings, and hay that are used as bedding for the stalls and coops. We clean all the stalls, cages, and coops out onto the compost heap, as well as adding the garden scraps/waste and the kitchen scraps. The livestock will eat a lot of the garden and kitchen scraps we throw on there, but some of them get mixed in.

Because we have so much available to compost we generally have 2-3 piles in the barnyard because one pile would be way too huge. At the higher end of the barnyard is the least composted pile, where we add all the new stuff. The one farther down is more composted and the lowest is what we haul to the garden in the spring. As it breaks down we move it down the hill to the next pile. If the upper pile hasn’t had much stall/cage/coop cleaning out onto in awhile and is starting to break down pretty well we move it down right before we do a major clean out so that all the new material is in its own pile to start decomposing. The movement of the piles 3 times a year or so also gives them a big full turn over. And it gets small stirring and turning daily as the chickens scratch through it and then we rake it back into piles every few weeks.

I explain how we make our compost in more detail in a post called Putting Your Chickens to Work Making Compost.

The soil in the high-altitude Rockies is generally not at all useful for gardening. But using raised beds and adding good top-soil and compost can over time give a very good base for growing plenty of produce. And removing troublesome pine trees that drop pine needles into the garden soil will help as well.