The Food in Jar’ Challenge for April was quick Pickles, I made Jerusalem Artichoke Pickles.  As you know you can pretty much quick Pickle almost anything.. but the issue is that its April on the farm. Lets just say that things growing for pickling in april in Zone 5 in Ontario is few and far between.

As the snow melted, I went for one of my very first Spring foods available for foraging on the farm, we dug into one of our Sunchoke Patches.. Ah Jerusalem Artichoke’s one of the very first spring foods that are harvestable as soon as the soil can be worked.

The jar on the left is Pickled Jerusalem chips in a sweet bread and butter brine and the jar on the right is a lovely Dill Brine with Fresh Ginger, Orange Pepper Slices and Jerusalem Chips. I saw online that many folks left the skin on, and I just could not do it, I washed, trimmed  and peeled mine.. all the leftover bits went into a pot and was cook up and used as fodder for the piglet an the chickens. 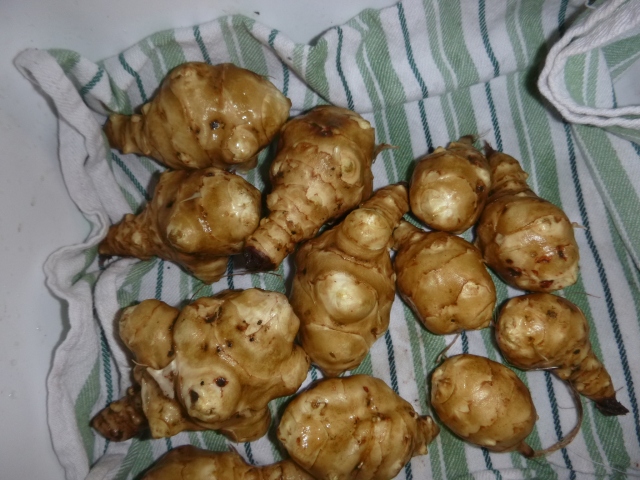 What is your favorite way to eat Jerusalem artichoke’s? Do you grow them in your garden? What is one of your first spring foods that you can harvest?