Mom never used a pressure canner, in truth I still prefer waterbath canning myself but when it comes to safely making soups that hubby takes a pint to work and heats up barely, the pressure canner is the only safe way to go

She had never seen me do a batch of 18 pints, first thing did was add a tsp of pearl barley to each jar, then I made   blend of carrot, onion and celery, half a cup per jar, in a heavy steel pot, I cooked our home raised beef with a couple cloves of diced garlic till brown, 1/4th cup on top, jar filled to 1 inch below rim with hot beef broth, rim checked, lids on and into the pressure canner for 75 min at ten pounds (per my sea level) 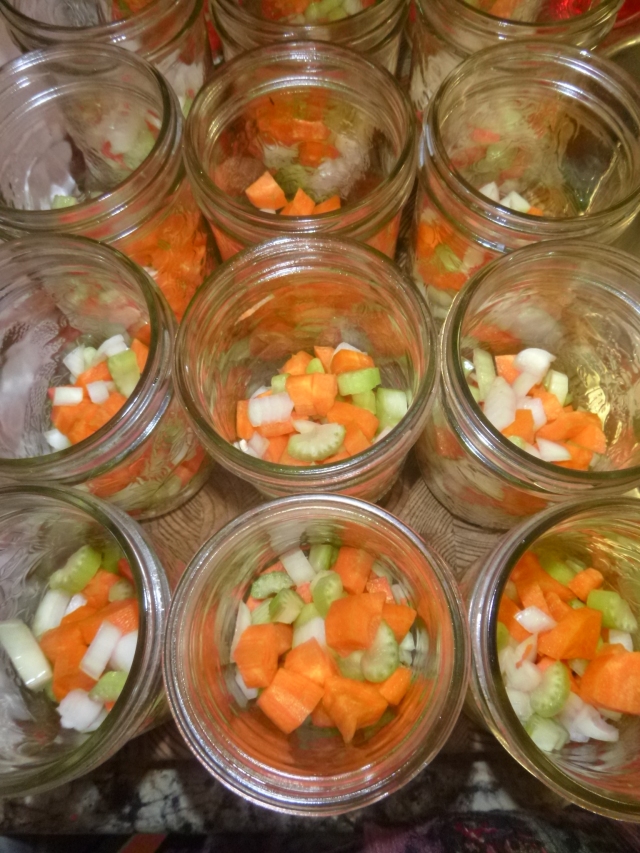 So hot still they are floating and jar boiling, it lowers as it cooled, where they will be washed and have the rings removed but hubby will put a ring on while traveling to work.

The cost on these are worth talking about, some things are only reasonable because I had thing, grew things and got on sale. The jars are eight years old, so .10 cents per for this year, the lids were got on a huge sale and I bought a case of them, so .20 per jar, .66 cents for the meat, veggie, barley and broth per jar. So not including power, it was 99 cents per jar.

high end soup in our local store will run you 2.19 per can and its not anywhere as healthy as what I can make