Baby Oxen in training and a good visit.

Hi Guys, how about a little cow love today!

I got to slip away from the folks for the afternoon and go visit a old friend of mine and her family, we all meet in collage, and her and I were roommates for a time (boy was that long ago), she had meet her hubby at that time, so we have known each other for almost as long, They have six beautiful children, and I always feel like I am missing so much of their growing up living so far away.

I will own up to the fact that I find when we all get busy in our lives, we often think of dear friends but don’t reach out and say, thinking of you nearly often enough, this is often the case with Miss K and her family, along with other dear friends.

Miss K was asked and hopefully will do a few guest posts on the blog in the future as well, but one of the many highlights for me was that we tromped out into the pasture and got her two baby boy oxen in training and I got to meet her very expecting milk cow to be, and with a growing family of six, that milk, fresh cream, butter and cheese will be quite welcome in the house. She came for some apple but sure gave me the EYE and was not at all sure about the stranger in the pasture. 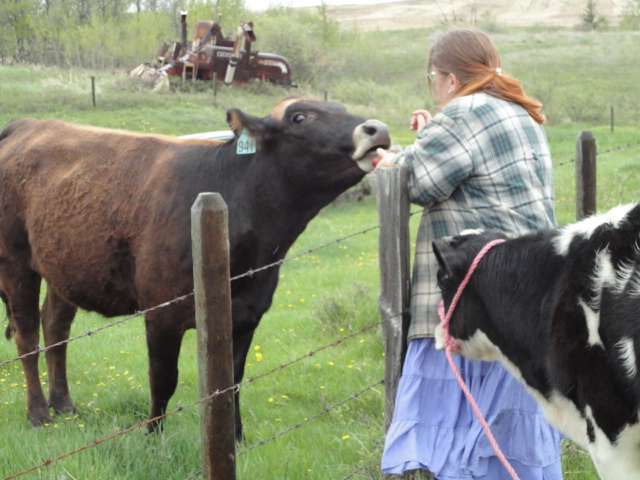 We had a good walk into the pasture to find the boys, they are six month old, so this photo was taken after we got them to the barn area, they are enjoying their time out on fresh pasture, there was a lovely set of new twins to one of the old range cows at the age of 26 to have twins is amazing, and they were looking so good.

So after giving them some water, it was time to hitch them up, I laughed at this photo when I saw it, I like how the barn kitty wanted in on the action. I tried to get you some photos for this post but to be honest, I was to busy watching how she was working them and how they were reacting to different things, as this is the first time I have been able to watch someone else with baby oxen, and even with the differences taken in between having one vs a team of two, I can see that having a team in some ways makes it easier nd in others makes it different.  I came away with at least three things I will try at home with Girl on my next training sessions. 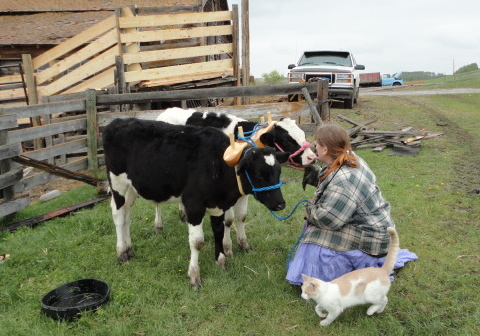 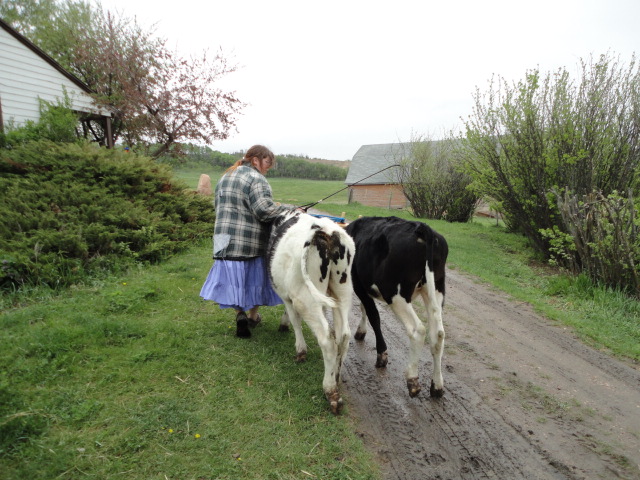 Ah Girl is appears has been having a bit of a time of it with me gone, its the first time since I got her that I have not been home, and in the first day or so, she decided to break down her gate to her loose stall in the barn, the story told by Dh was cute, it went along the lines of, she got out, he fixed it and put her back, she broke out and he fixed it a different way, she broke out, he bought new hardware and fixed it and she broke it within min and got out..

The way DH said was picture Fred Flintstone stomping with that look on his face as he went and got a 50 foot peice of heavy chain and chained the gate shut, with a YOU WILL STAY WHERE I PUT YOU!

Then yesterday she was out grazing on her tie out, and something bite her, she bellowed and ran for the barn, and DH said she was sure upset and he worked with her to calm her and see what happened but that she even had a tear run down her face but let him fuss on her and take her back to her stall and give her some extra’s to sweeten her day. At ten months she not that much taller then Miss K’s six month old altered boys, but different breeds and sex’s, but it was interesting to me.

4 Responses to Baby Oxen in training and a good visit.