A Hugelbeet is how you go about using up scraps on a farm and turn it into something that is productive..

Last year, in the very bad winter storm, we have the power company cut down a number of bigger limbs, we “had” meant to get them moved but it was one of those things that got put to the way side with all the now things that happen on a farm, so this spring I needed to find a way to get them in use somehow.. hmmmm

Dh, had to take the crow bar to get some of the logs moving out of the frozen ground, but once up, a rough 12 long by 4 feet across bottom layer bed was created out of the big main logs which were as high as a foot for some. At the same time, I spent two hours raking the front lawn, into piles of leaves/small twigs and piles of large branches.

Gathering up all the down bigger branches from in the front and side big tree’s we started hauling and creating the second layer, now it looks like a bush pile..its about a foot an half high at the moment.

Now 12 loads at approx 5 cubic feet per load of small twigs, grass, leaves, and any other bits found in the lawn raking put on top and the sides as the 3rd layer, it grown in height another six to eight inches by the time we are done. 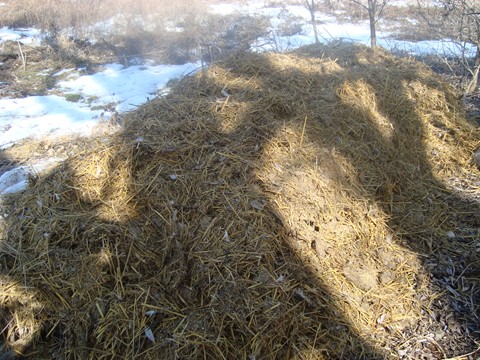 4th Layer, six months supply of composted deep bedding out of the one chicken pen, another foot plus in topping, at which point, DH climbed it and with FG helping hold on to keep his balance, jumped up and down on the top as we worked to compact and flatten it a bit. I thought it was enough, DH didn’t agree, so he is currently cleaning and moving the whole winter’s worth of deep bedding duck pen to add another six to eight inches of layer 4 to the whole mass.

Layer 5 is another full foot of well composted big barn (sheep/goat) pile mixed with a bit of dirt in. This bed is now sitting around 4 plus feet high at the moment, but they say that it will settle as much as a foot and half in a single years worth of use.

A Hugelbeet has its roots in Germany and yes, its a raised garden bed, which we hear about so much these days but its a raised garden bed with a difference, its has no outputting costs on a farm other then time, it is a way to re-create a natural process of how wood rots in the forest, the tree fall down, it lays in contact to the earth, the leaves and big and little twigs fall on it, it creates a sheltered area and the right climate to have everything rot out fast then if you just left it sitting somewhere.

Then add in the typical bonus’s of what a raised bed will give you, warms faster, but with the way this one is build, it means that it has a good air flow at the bottom, and it hold a good amount of water if built and used properly, I am planning on making two of these this spring, one is in part sun (6 hours daily) and one is full sun, I will plant each one a bit differently depending on the sun hours but otherwise, will plant a good wide amount of things to see what does well and what does not. I will give you regular reports on how the hugelbeet performs thoughout the full season.

They say that each one will last 3 to 5 years if just left on its own, but that with regular spring toppings, that you can keep using your garden mounds for years to come.

Questions/Answer, what do you do if you are starting in a area that has sod on it, the answer is you cut it up, and pull it up so that the tree’s touch the dirt, here we are at a friends place havin a work bee helping them make a hugelbeet for their farm. If you do this, after the chicken layer, flip the sod grass down and put it down as a layer of added dirt, and then continue with the layers as listed above. As you can see, we were able to put down really well rotted wood for that first layer on this bed. 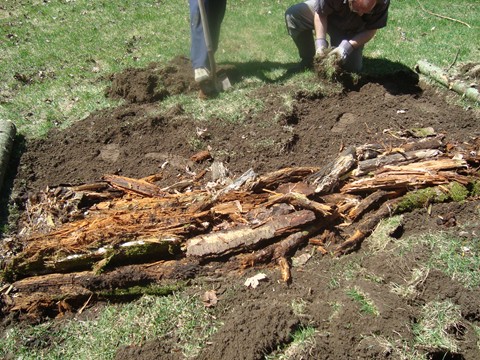 Here are a couple more beds finished just waiting for the dirt and the plants to be added at the end of may in our area. 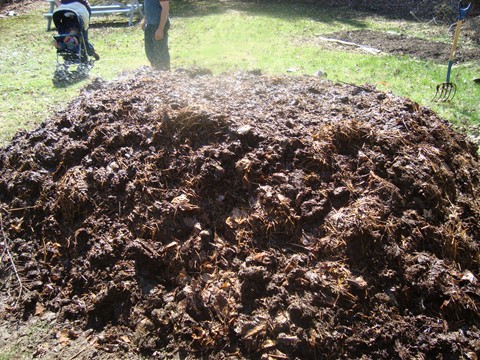 This entry was posted in frugal, gardening, gardens and tagged Frugal, Garden, Hugelbeet. Bookmark the permalink.

11 Responses to Hugelbeet -Part one