Growing in Straw- Spud report for 2014

Growing in Straw potato`s this year.. All new spuds kinds to us.. As you know.. Lots of rain this year..

The row produced 63 lbs, with a reasonable size range. Shape was generally satisfactory with few “nodules”. Only minor issues with rot and pestilence were noted, with no UV damage. The potatoes were generally found at the soil/straw interface, but a number were wholly within straw and occasionally were found after chunks of straw had been discarded. It may not be a coincidence that this variety had the most individual plants and produced the most weight.

The row produced 48 lbs, with a reasonable size range. Shape was generally satisfactory, with a number of lengthy potatoes that would be well suited for french fry making. Only minor issues with rot and pestilence were noted, with no UV damage (note that blue pigmentation is supposed to reduce UV damage anyway). Potatoes were generally found at the soil/straw interface but rare examples were wholly within dirt. Redigging the row might produce a few additional spuds. The color of the potatoes did make it a bit more of a challenge to find in the dark material.

Online source indicates a yield of 10x – 15x is possible under optimal conditions. we planted 5 lbs, we got a yield of 9.6x, good.

This was a partial row with only seven plants. It produced 41 lbs of good potatoes and 3 lbs of rejects, with a mix of rot, pestilence, and suspected UV damage (color was creamy, rather than green). Size and shape were mostly good, but the hills were generally “stuffed” and projecting to surface with small potatoes. A few odd shapes were observed. It’s thought that these hills were planted with whole potatoes and thus might’ve done better if the seeds had been split before planting.

Online source indicates a yield of 10x to 15x is possible under optimal conditions. we planted 5 lbs, we got a yield of 8.8x, good.

This was an oversized row and a half that produced 34 lbs of good potatoes and 17 lbs of bad potatoes. Rot, pestilence, and particularly UV damage were noted, even in potatoes that appeared to have been covered; the straw may have still permitted light in. Shapes often included nodules, and even the accepted potatoes often have rough looking skin. Some hills projected to the surface, contributing to losses.

It’s possible seeds needed to be further split or more deeply planted, but given how the other three varieties did, and that the total weight harvested was comparable, I’m inclined to think it’s just not as suitable a variety for this sort of planting. Some online reading characterizes this variety as “early” so we may also have lost simply because they should have been harvested sooner than was done. 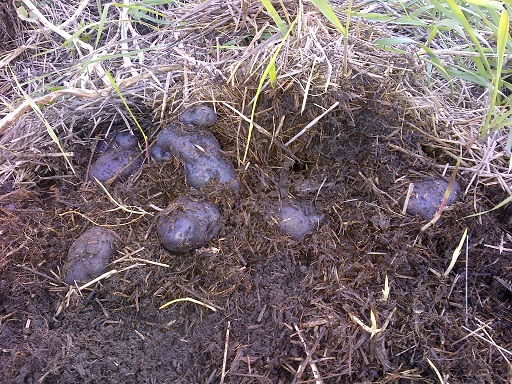 This entry was posted in Food Production and Recipes, Garden harvest and tagged Growing in Straw Potato`s. Bookmark the permalink.

13 Responses to Growing in Straw- Spud report for 2014