Posted on November 8, 2019 by Just another day on the farm 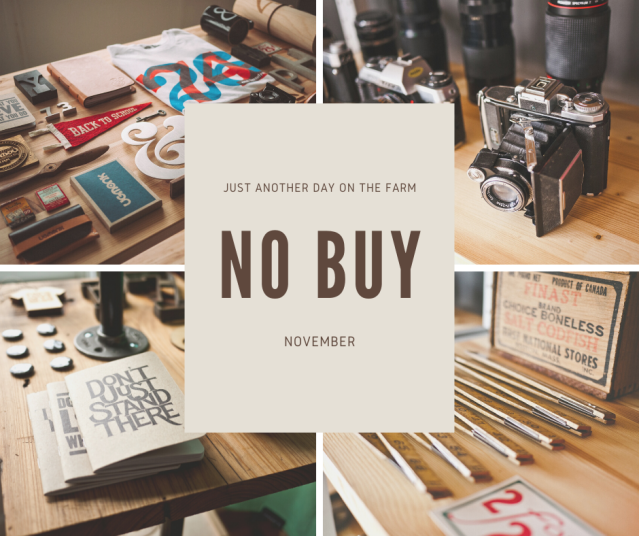 Week one of No Buy November Overview

We had a good week, I did not look at amazon once, this is a good thing.. I will own that I have one pre-ordered and pre-paid book that will be published next week that will show up in my reader.

I ran out of feed store sunflower seeds but its fine as we have lots of big sunflower heads in the croft hanging to dry, its just a matter of pulling the seeds out and putting them out into the bird feeders.

The only cash spent this week was paying for the hay bill but that is allowed and it was a nice thing to take that bill off our to do list.

I did have a craving for hot chocolate but that was easy enough to deal with.. I made a homemade deluxe version.. So Good.. Here is the homemade Hot Chocolate recipe if you would like to make it yourself?

I have started re-reading a favorite book series, it has 14 books in it so it will take a while to work my way thought them.

I did decide to do a little putter clean up and looked at a box filled with little tiny gifts, all cute little things I have picked up over the last year or even two in some cases..  I looked at the box’s of cards and gifts I had found from my second hand shopping and decided that I wanted to so a little gift giving!

This is how I came up with Secret Santa idea!

Hopefully some of  them will be finding their way though the mail to interested readers as a little surprise in their mail boxes. maybe some will arrive in my mail box as well!

Now I will have to pay for stamps but I am going to count that as a “blog” expense which is not in the same budget area as my own household stuff.. plus while I will get things ready I am not planning my big mail out till the first week of Dec..

Because everything being used has been gotten either from the second hand shops or is a homemade or a homegrown gift.. I feel it fits in well with the challenge but also proves that you can still be active in regards to the holiday season.

Its just been a very quiet week here on the farm, I made bread, I made a lovely mince meat cake with a buttercream icing on it. I did get my first canning load done in weeks so that took out 22 pounds of white breast chicken breast out of the freezer and into the canning pantry.

For those that are joining me in the No Buy November Challenge, I hope you had a great first week as well! Here is to week 2!

3 Responses to No Buy November -Week 1