Friday Rambles around the table “paycheck to paycheck”

Come on in.. What a lovely day for the drive here.. it’s not to cold yet and it’s just the perfect Christmas snow.. fat, soft and fluffy! 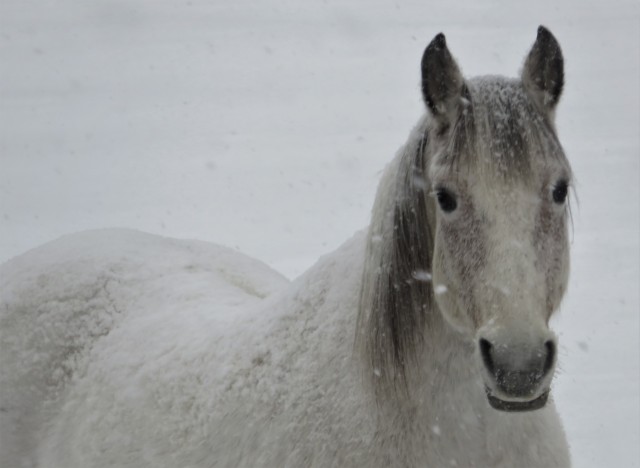 Ya, the big guys could go the barn but they don’t seem to mind the snow in the least.. and they do like to watch the world go by. They have their big lean too and they have their spots in the big barn but give them a choice and they are out in the weather..

I have a pot of soup on and there are fresh biscuits to go with, I will put the kettle on for a hot cuppa and if you still have room.. I am baking a raspberry dump cake in the oven..

Yes, I agree.. soup on the stove simmering away is a wonderful way to scent the house LOL

I have been watching with concern what has been happening south of the border in regards to the government shut down and how it is effecting so many workers and households.

The Canadian government workers have been struggling now for almost three years when it comes to being paid, being under paid, being over paid, having the wrong amounts taken for tax’s, union dues and so forth. Thanks to a new pay system.

“The Phoenix pay system is a payroll processing system for Canadian federal government employees, run by Public Services and Procurement Canada. After coming online in early 2016, Phoenix has been mired in problems with underpayments, over-payments, and non-payments.”

These hardships have caused endless worry and hardship, even those that were able to get coverage to help them have had to deal with clawback on the first pay check that comes back in, leaving them gasping for breath..  checking and praying that your pay will be in your account, its causes workers to lose their homes, their vehicles, and in a number of cases their marriages.

It has effected those who are having children, with some mom’s having whole leaves with no paychecks coming in, or the wrong pay coming in..  There have been mom’s that went back to work early trying to get this sorted.

It has effected those with medical leaves both short-term and long-term.. it has not been a good time to have a heart attach or get hurt because it could be weeks, months or years before cases where sorted.. I know that sometimes people never got it sorted while off and only started getting pay checks again when they went back.. if they were lucky enough to go back in a reasonable time frame

It has effected new hires (its been very hard to get top talent to want to get hired when you don’t know if your paycheck will be there) its effect sideways movement or upward movement.. This one I know personally.. Hubby and I have been in a solid holding pattern for more than two years because we are in fear of what would happen if he moved departments, could we suddenly find ourselves lacking our main income?!

It has effected retirement.. I know at least three people who would have retired in the past two years that refuse to even consider it, until the phoenix is fixed as they know that it could be weeks to months or longer before their pensions could come on-line.

The report stated that the issue is widespread across departments, with 62 per cent of employees paid incorrectly at least once during the 2017-18 fiscal year — the same percentage as the 2016-17 fiscal year.

“The federal government’s Phoenix system woes are as tumultuous as ever, according to a report by the Auditor General of Canada, which says pay errors this year alone amounted to about $615 million.

The 26-page report released Monday by Auditor General Michael Ferguson describes the Phoenix payroll system as the one “significant blemish” on the federal government’s financial record.

More than half of the roughly 300,000 people employed by the federal government have faced pay problems since the Phoenix system was introduced more than two years ago. Workers have been overpaid, underpaid or not paid at all for months at a time.”

Its been some hard times for those who work for the government, they go to work faithfully and then they cross their fingers if that paycheck will come in, will it under, will it be over

I personally know of teens that have started working to help keep the bills paid enough to keep houses.

I know that trips cancelled, after school group or sports events cancelled for the children in these families. I know of adult children that have gone to work full-time to help mom in single mom households instead of the planned post secondary.

I know of family after family becoming one vehicle.. no vehicle, public transport only, of families that had for the first time combine generations to make things work, that have done without, that now know where their local food bank is. Who have put off getting their teeth done and more.

Yes, I have been watching this government shutdown with a worried eye  I am sorry to the families effected.. those that work for the Canadian Government have a good grasp on what is happening and what will be coming if it keeps running longer and longer!

I hope that you will have one or more other incomes still coming in to your household, this can be the saving grace in the short term. Look at your other skill set, what do you do that can make a little income on the side, even a extra 20 a week can make a huge difference in your food for the week!  Side Note: Now is not the time to stock up, buy basic products to make things.. if you have it in stock already, go for it, otherwise focus on things that use your trained skills or things that do not require you to put out cash first but bring it in.

Also remember to barter! Maybe you can trade off after school pick up and care for a full day of baby sitting on the weekend when you are home.  Think outside the box!  Use the library, you can get rid of Netflix and bring home music, books and DVD’s for the whole family.

This entry was posted in At the kitchen table and tagged Farmgal's Friday Rambles around the table, Friday Rambles, Paycheck to paycheck. Bookmark the permalink.

17 Responses to Friday Rambles around the table “paycheck to paycheck”