Now sometimes when we make everything at home, we can have lots of leftovers or maybe we had a opps,  in this case, I made a double batch of bread dough, got busy and forgot that I had not added the salt, so flat bread..

Not that big of a deal really, depending on what you put on it, it tastes good but its not really up to standard.. so what is a girl to do with a full loaf of 3 day old bread with no salt in it.. Make dried bread cubes or crumbs, make bread pudding or make stuffing. 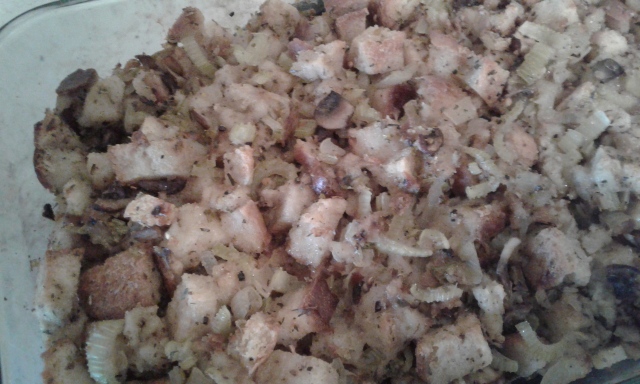 Stuffing for the win.. I have a steaks pulled for supper and so I am going to make a Mushrooom-Onion Stuffing to go with the steaks for supper, I will figure out the veggie at a later point.

Step one- cut up the bread into cubes and then put them into a low oven (275) to help dry them out, then allow them to cool before use. This gave me around 12 to 14 cups approx. It will fill a small cake pan nicely.

Cook the onion, mushrooms and celery together in a good pat of butter at a med-low heat till the onion is clear.. add your broth and allow it to get warm (not hot) and in your mixing bowl, drizzle about a cup of it, then sprinkle your dried herb mix and give it a light stirring so that the herbs are well mixed over the bread crumbs.. 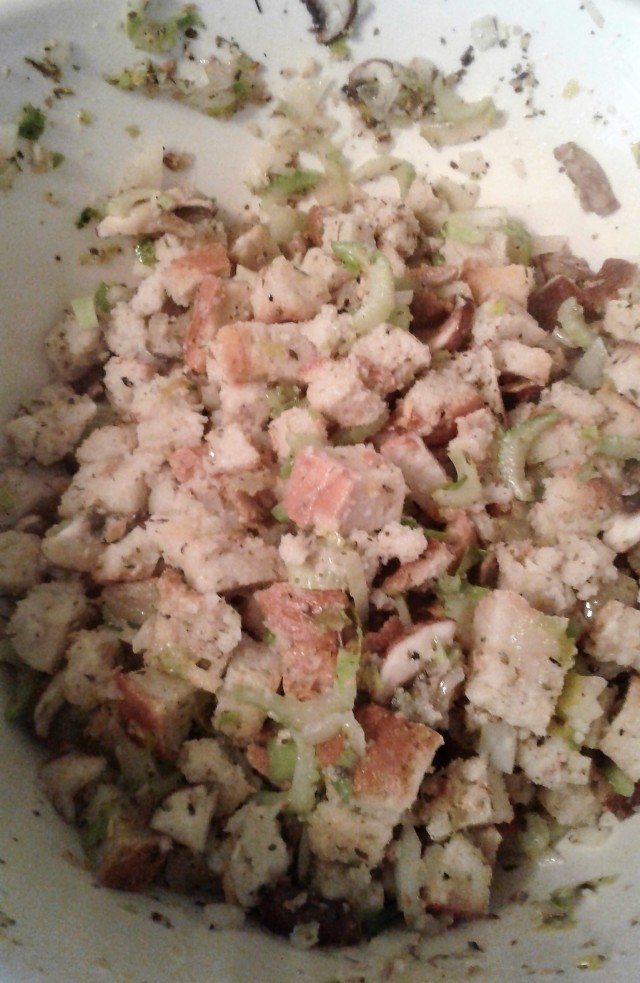 Then drizzle and stir the rest of the broth over it.. you want it damp but not wet and then put the whole thing back into the cake pan, cover with foil and bake for around 40 min at 350, take off your tinfoil cover for another ten to twenty min for a lovely browning on the top and its ready for serving!

This entry was posted in Baking and tagged Bread Stuffing recipe with Mushrooms, Stuffing side dish. Bookmark the permalink.