Below is a really great post on Freezing Colostrum but first a update.. I missed the post yesterday, what a day.. I was up before the sun, showered and ready to head off the farm for Eco-farm day about an hour away.

Very excited about it, lots of good talked and seminars that I was wanting to attend and even better a dear girlfriend was going to be there so a nice planned visit at lunch.. but the sheep had other idea’s, Hubby came in and said, hon. you need to check this ewe..

he was right, she needed some supportive care and I assumed that she would also be birthing pretty quickly, yes on the support, no to the quickly, and a second female yearling girl started as well

We are still waiting on the bigger female with twins and the yearling had a single stillborn lamb, so we have cleaned her up, started her milking stand training an milked her out and them strained and froze her Colostrum into 4 oz feeding for “just in case” for the rest of the lambing season

Normally I milk share with the lamb or lambs, but in the cases of sprite, I will be milking her full time twice daily, I am thinking at the moment for a 7 and 7 for my milking timing and we will see how that goes.

As she is a first time freshing, I have no idea at all on what her milking curve will look like, but will find out.. she has a nice teat size and placement and she let down well for me and didn’t kick which was really nice, for a first time milking, it went very well..

Its a great idea to freeze up one lambs worth of colostrum just to be on the safe side, ewes only produce Colostrum of the best quality for around the first 24 hours, but it does take three full days to bring in proper milk.. 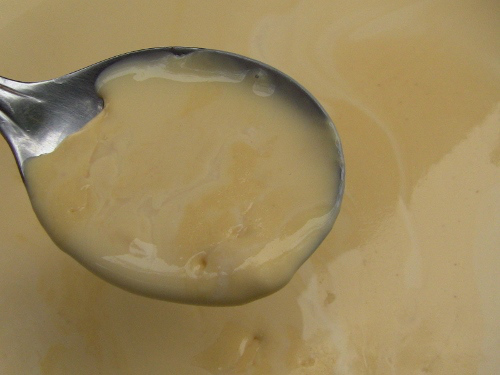 The kind shown above is in fact my cow Colostrum after its been chilled in the fridge, it was thicker I found then my sheep but its a great photo to show what I wanted.. See example of sheep itself further down the write up.

itself is a very thick rich dark yellow milk, you would never look at it and think regular milk. It has not only a amazing amount of goodies that the lambs need but can only accept in the first 24 hours but it also gives the lambs a dose of antibodics..

And not just any old from my mom antibodics.. o no!

Tailor made for your farm, your barn and your flock Antibodics, they say that the mom needs to be in the area of birthing a min of 14 days before giving birth to give the best protection, so do not move them from field a and shelter Z one day before lambing or you will get just a bit less protection.

The highest Quality Colosturm is from a older full grown female, while a young female will produce she as good at hitting the best high end note..

A ewe in very good shape will produce enough to feed at a min twins or triplets, but if you have a female in good shape that is older that has a single, its a great idea to act as the other twin and milk her out for saving for possible use in the future.

This amazing liquid gold can be used in a number of ways..

For a newborn lamb that lost its mom

But it can also be used for other critters or ourselves as a powerhouse of health.. I gave a portion of this mornings milking to both Mimi and Priss, the youngest and the oldest purrpots in the house.. and they both went crazy for it..

Remember it is considered ideal that lambs get their first nursing or feeding within the first 30 min of birth but they must have it no later then 18 hours after to have any effect at all..

Frozen colostrum should be thawed  very slowly in a warm water bath. Do not use direct heat or this will destroy the antibodies within it

Do not use a microwave, its just to easy to overheat by a second or two and ruin it.

It is best to freeze colostrum in small amounts because once frozen colostrum is thawed, you only get to use it once, you can not freeze again. and as you are only feeding it in small portions, keep the frozen portion ideally the right portion for a single feeding of a lamb.

Frozen colostrum can be stored for up to 12 months but I never do that, I try and freezer for the birthing season and then I use it up afterwards if not needed, either for our own use, the critter use or in soap making. 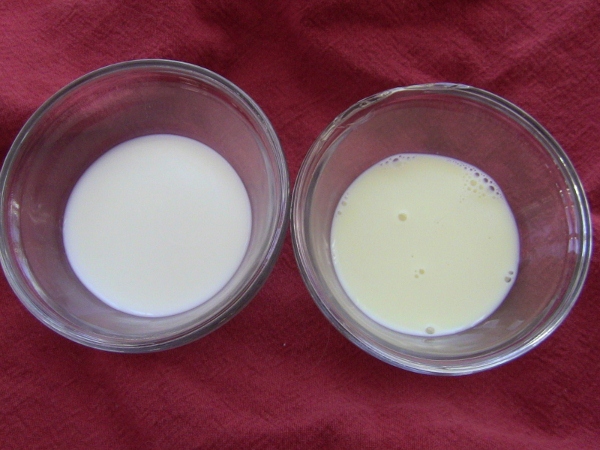 a example of first milkings from a sheep ewe and a ewe on her ninth day of milking.