Meatless Tuesdays were a big thing.. and soon enough Meatless Friday would arrive as well.. its interesting to see that we had a meatless day become something that the government asked everyone to do, clearly they could only truly enforce them in the public  but from my reading many folks did in fact follow along in the private as well.

As the slogan of the Food Rules reminded Canadians, the goal was straightforward: “Eat right, feel right – Canada needs you strong!”

I am doing a Meatless dish for breakfast and lunch but we are having a pork stew for supper..

Each Tuesday will feature a very important veggie..

Todays is Turnip as its called in Canada, by which I mean the nice big yellow storage one, it would be called Neeps in England.  While it was somewhat common food in Canada at the time, it was certainly not known like we would today.. I think most of us have had mashed turnips served at a bigger meal with butter and brown sugar added.

Back in the day it would appear that it was both a farm animal feed but also that it was considered a very poor persons food. They had their work cut out for them..

Things like Carrots, Cabbage, Beets and Turnips..  This was Animal fodder food.. you feed your sheep and cows those roots, you did not eat them..

And eating the green tops..  snort..  there is a reason that they needed to do a lot of giving a helping hand in terms of talking folks into adding and eating certain foods. 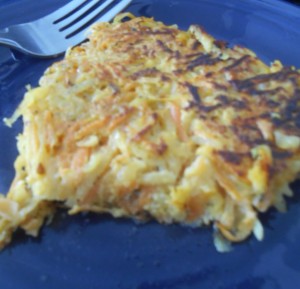 Veggie hash -Two full servings or four servings with toast.. ( I am pretty sure these would be awesome with some sour cream or apple sauce if that had been allowed)

Wash and peel One large Carrot, one fourth of a large peeled turnip and one large potato, I peeled it but they recommend it in skin, grate them in the large hole in your box grater, add salt, pepper, dried herbs of your choice, I did a mix but lots of horseradish greens, one egg and 2 tbsp. of flour.  Bacon drippings is what was recommend and that is what I used, I can see if adding a lot to the flavour. cook in a med-hot fry pan till crisp on both sides and cooked though. 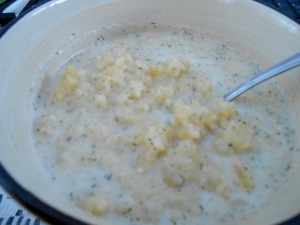