Ok, first off lets just say, its not a real cheesecake, I am not even sure why its called that other then it had creamed cheese in it.

This recipe is a mix and a flob to two recipes I read online and then played with.. The base of the idea came from this recipe However as you will see it got changed up. 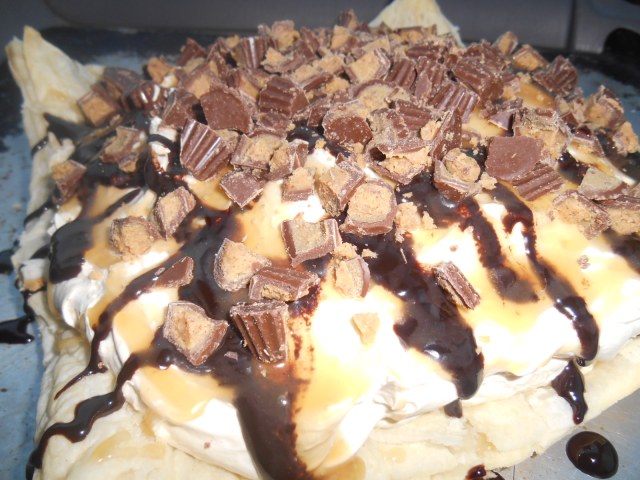 ,In a oven at 350 out your thawed phillo dough into a pan that will allow the corners to lift and create a bowl, bake till done, then cool, then remove from the pan or not.. your call..

In a mixing bowl with beaters, beat the cream cheese till fluffy. Add in the peanut butter, beat till fluffy again, then add in the cool whip and gently fold it in, until all mixed threw, and put into the cooled pastry bowl, then drizzle chocolate and carmel over top, and cover with the chopped up cups..

Chill, slice smaller portions to serve, its rich and sweet!

Reviews : Out of five what is the score..

B- Its over a ten

And there you have it, from my end, it was awesome.. I personally if making for myself, I would have put less toppings and might even go with a nut to cut the sweetness a touch, and I have to try making this with a chocolate crumb base.. o my..

None the less everyone that had it loved it.. I will add a picture later today of a cut piece so you can see how it held together, which is does wonderfully..

Ps, yes I know its not a typical Farmgal recipes but it was a birthday request from my man on a dessert he say on a menu and wanted me to try and make..