Last year we got some new Copper wear as a Christmas Present.  A big huge copper cooking square pan and a Copper Crisper with copper tray. I put them up and kind of forgot about them, I decided this week I would bring out the crisper tray to see if I could in fact crisp/cook the veggies with lots of flavour but without the extra fat I normally do.

It works out very well, the herbs added great flavour, the tiny bit of broth I had used as my liquid held up quite well with the veggies used.

This morning Hubby asked me to make Sunday Flapjacks on this snowy (very snowy) day and so I thought hmm.. that big square pan could cook four at a time,  it says its non-stick, lets give it a try.. 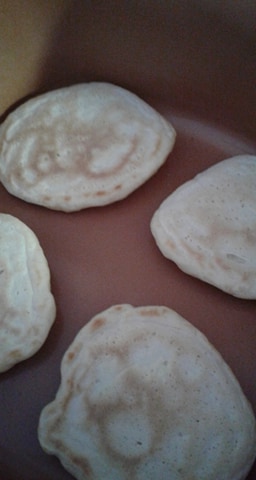 I did cook in the oven copper tray this week, I did a mixed veggie and it worked great, they cooked faster by almost 8 minutes over my normal glass pan and I did use a little broth but no fat and just some extra herbs on the veggies.  I was very pleased at being able to enjoy the veggies but being able to reduce the fat in regards to roasting the veggies.

I will keep trying this in regards to different types and will see if its worth its own post in the future.

Do you cook with Copper Pots? Do you use the new Cooper Non-stick? Have you tried the air crisper for the oven?

This entry was posted in Food Production and Recipes, homestead and tagged cooking with a Copper Crisper, Cooking with coppper pots, Non-stick Copper Pans. Bookmark the permalink.

7 Responses to Cooking with Copper Pans