What a productive week.  Its been a steady week since I have been on the blog and there is just no way to split the past week into their own posts and for some reason I have been off my writing and have been reading instead.  The good news is that a lot of things I have been reading have got my thoughts and hands busy with things that I know will find their way to the blog in the future so I have to consider that a very good thing indeed.

Friday we went off the farm for a couple of hours after evening chores to go to a local fair.. it had a few fun redneck games including two that I will share here. Hubby rode the fake bull twice which was great fun.  It was the first time he had ever done this and I have to admit to being surprise that when I said.. o go on.. that he did LOL

Then we went on to the real reason I went, I wanted to check out the ax throwing area, they had brought in a company from the city, I have looked at the company and have often thought that it would be good to get their “teaching” as we have throwing ax’s here on the farm but I knew that they would be using a different type then what we have.

We got there very early and before the crowds and I was able to get a few questions in and some extra info.. without needing to head to the city to do it! perfect! For sure more practice is needed but that is true for most things 🙂

Saturday we worked on the farm. I am so pleased with the amount of yard clean up we have been able to get done. My new front pasture is responding very well to its growing out and extra seeding out. I have hopes for it to be a truly productive pasture for next year. We needed to go dig out some plants, cut down a few others and we will be seeding out some winter wheat by hand broad cast to do some extra spring fill for the first graze.

Sunday we had company on the farm and that pretty much takes the whole day when that happens, we do morning chores early and try to make the house tidy, we do the visit, which including horse back riding (a favorite for those that come) and then we work to get back on par and evening chores. It was a good visit.  We also had more chicks hatch that weekend.

Monday is normally my bake day but it turned into a garden Monday instead and Tuesday ended up being my baking day. Banana Bread was done on the weekend. I got a large amount of older banana’s on the sale rack and froze them so I will most likely be making a loaf a week for a while for Jason’s work breakfast and lunches 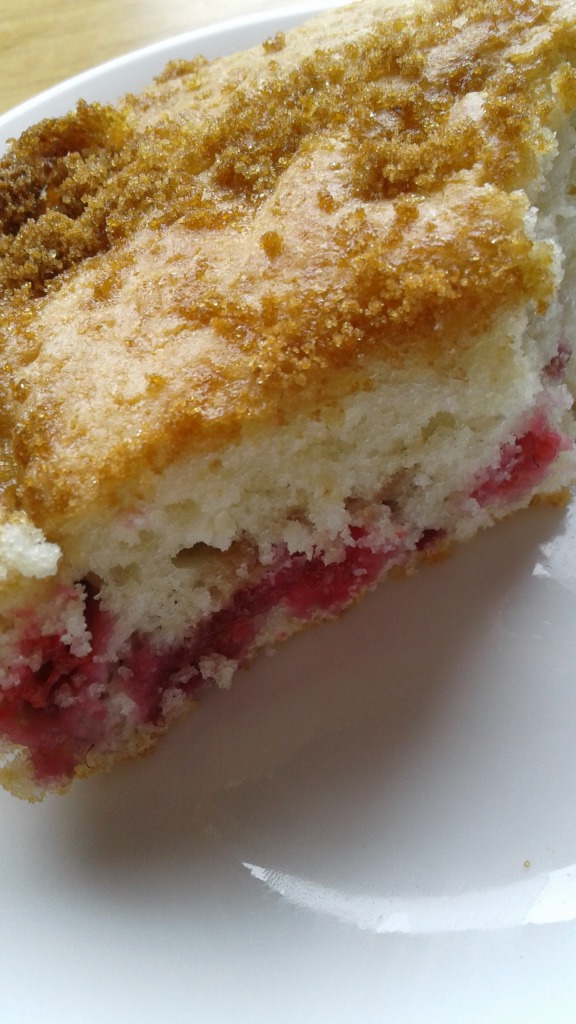 Our Dessert or stop for a bite to eat was a big old pan of a nice white cake with our home-grown mid-summer raspberry’s with a brown sugar baked in topping. I used the berries frozen to keep them from bleeding too much and I made the cake in a very large pan so it’s not very high at all but turned out just right 🙂 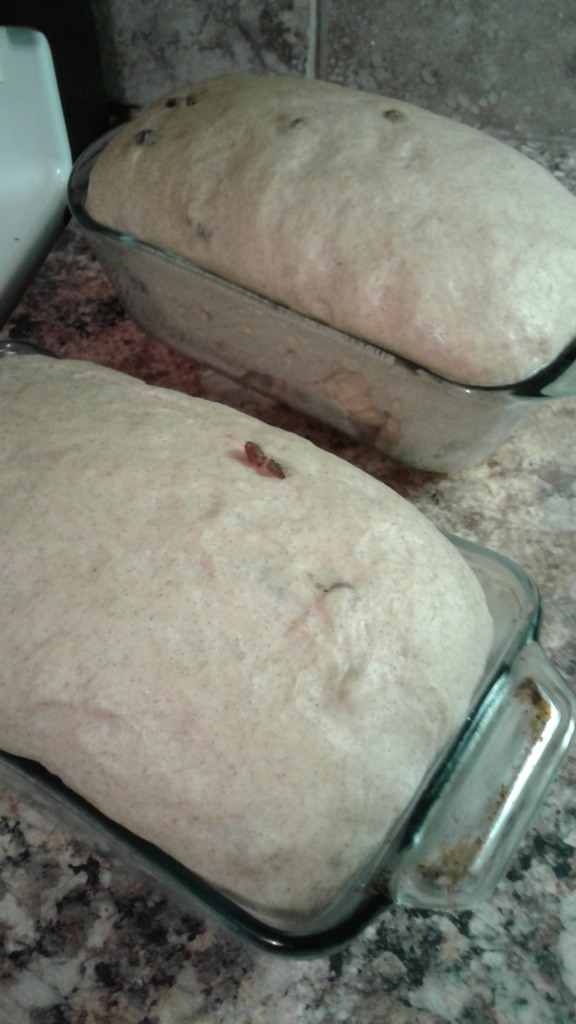 I had made a half-white/half-whole wheat bread last week and I was just not feeling it this week, so I made a batch of Cinnamon Raison Bread. I had to laugh, I have been using up the last of a yeast jar and its been working but not great.. which meant I was using a touch more yeast to get my lift. I opened a new jar for this batch and WOW.. I didn’t realize just how much rise I was going to get LOL 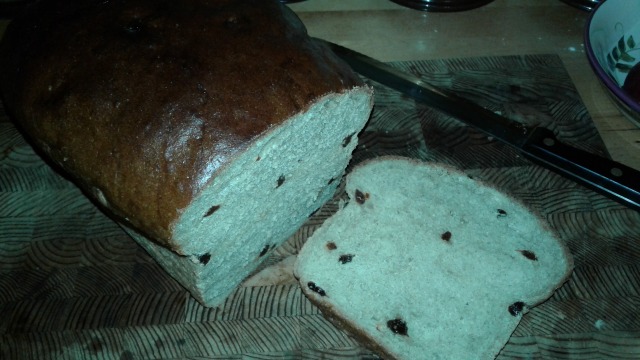 It turned out very nicely indeed but was a good reminder of the difference in how the bread goes between using sour dough, using older yeast and using fresh yeast.  Sometimes we just get used to using what we have and forget that a small change can have a huge difference in the results.

So lets talk about weather for a bit.. we had a high heat wave hit us again this week.. it was hot on the weekend but come Monday it really came on, Monday to Weds it was in low 30’s c but with humidex kicked in and it was 41 to 43c and it was that bad air like soup stuff.. that is when I get up early and work in the “cool” of the morning and hide in the afternoon.  We have new curtains in the kitchen and the foyer now that blocks heat and UV, I open them early in the day for the plants in the kitchen and close them up mid morning and they stay that way till the sun goes down.  Without my big tree’s the deck wood now gets so hot in the afternoon sun that you can not stand on it.. its to hot for my feet. 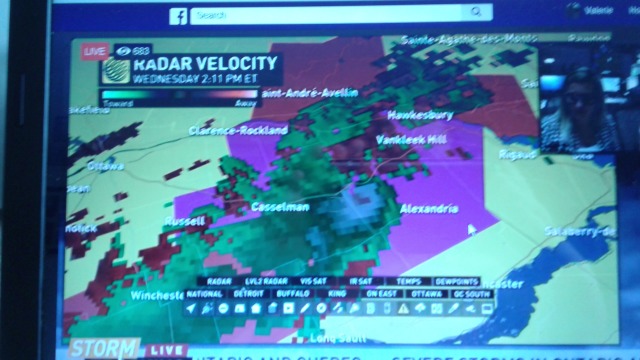 Weds however the radio sent off an alarm for tornado warning.. ok then. We did NOT get the notice on our phone, not that I am surprised by this to be honest, I have never gotten one yet.. So we headed out to the yard and did a fast round the farm just in case.  Then we watched the storm on in.

It was a good one and we both had to admit that it was a relief that the big old tree’s were down as we did not need to worry about them coming down.  We got a short hard storm, we got 1 and half inches of rain in 20 minutes, we got high winds and we got some really good cracks of lightning and thunder over top us but it would appear that the worst went past us, there was recorded 120 km hour wind or wind gusts at the local town, it took of bolted down decks to give you an idea.  There was a confirmed twister that took out two barns and there is reports of two more but it came down to an area that didn’t do damage to anything other than farmers fields.

I could tell you that I have a short video for you but nope.. because when it really started to get bad, we went to the basement for cover. I was really proud of how cool my farm hounds were but wee paris was not happy about it. Anyway it was here and it was gone.. Truly remarkably small amount of damage here on the farm.

While it might seem like a strange thing to say, it was good to see a couple of our systems being put to the challenge. Rain collection worked well and we put up just under 700 gallons.

Just as important to me was watching the water movement in our new yard and I can see where I need to put a dry creek for free flow, I was able to also track my drainage rate in the area that I want to put the rain garden system.

After the storm we did a big bean picking and today I am canning beans up along with regular house hold chores and farm work.  I am hoping to go mushroom hunting and fishing this weekend. I truly need some bush, River or lake time.. and ideally some riding time 🙂

Hope you have a great long weekend!

PS, I almost forgot.. That was something else that has been keeping me busy.. Paris went to the vet last Thursday so a week ago and she had her teeth cleaned and seven of her teeth needed to be pulled out.. 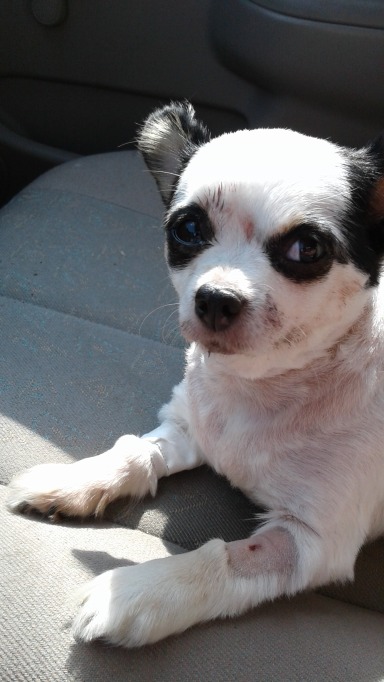 Poor wee moppet.. This photo was taken just after she got out of the vets, she was still pretty druggy at the time. The vet gave me a week of antibodics for her and pain meds for five days and she has recovered so well. She looks great, her mouth is healing well and she is eating so much better 🙂  I am so pleased with how well she is doing and I know that this will improve her overall health for years to come.