Striving for Victory -Eating on the Ration

I snagged the information and rules that hip roof barn has on her blog .. My own writing will be on the slant. This gives me the base line.. I will admit that next month, I am going to see if I can over the next few weeks, dig out the rations for Canada. I know from my last wartime challenge here on the blog that there was differences between the two countries.

However for the rest of this coming month I will follow the same rules as the ladies. I know that Hip Roof will be reading this.. do I need to make my own dozen of dried eggs or can I use my own fresh farm eggs?

Rationing was brought in to ensure the fair distribution of food to all citizens. It ensured that everyone got an equal share of available resources. One of the benefits of rationing meant that items subject to rationing would be available. Another benefit was that regardless of one’s status in life, everyone had equal access to basis, nutritious food. As a result, the health of the British population improved dramatically.
Ration amounts fluctuated throughout the war. 1942 was one of the hardest years in terms of rationing. These are the rations we will be following: 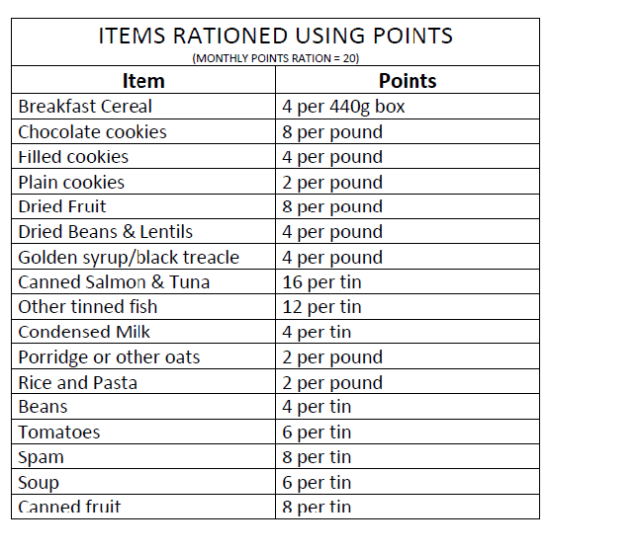 Some items were rationed according to points. The amount of points needed for these items could vary wildly from one week to the next. I have combined information from various sources to determine the points H and I will need to purchase various items.

Here are the amount of points needed for common items available to shoppers in wartime Britain.

Not everything was rationed. Vegetables and locally grown fruit was not subject to the ration. Gardens cultivated as part of the Dig for Victory campaign helped feed families.

Food foraged from fields and hedgerows, such as berries, were also not rationed. Bread was not rationed, even though shipping wheat from North America put the lives of sailors at risk and took up cargo space that could be used to transport soldiers and munitions for the war effort.

However, only the “National Loaf”could be sold by commercial bakers and white flour was not available. Fish, sausages, offal, and game such as rabbit, and chicken were not rationed.

However, these items were often very hard to find. Other imported items such as bananas could not be bought for any price.

We will not exceed our rationed amounts.

We will use World War 2 recipes as often as we can but we are not limited to using only recipes published during the 1940s. We can use modern recipe so long as it uses ingredients that would have been available in Britain in the 1940sl

I will be doing the same.. as long as it uses the food, I will create my own recipes

To emulate the requirement to register with our supplier, we will shop at only one store. Since my little grocery store is often hit by hoards of hungry tourists during the summer, I figure that only relying on my store will help simulate food shortages. Of course, we will be carrying our groceries home in our reusable shopping bags!

I have to figure out how to do this.. as I am on a farm and if I was on a farm in the country during the wartime, I would have slightly different rules. However for the next three weeks, I will follow the same rules. However given what we are allowed, I am going to pretty much just be eating off the farm and the land itself.  Wild game was considered free while it was harder to do in England. They were given breeding rabbits and so I will keep in line, we will only have eggs from the hens and we will eat rabbit meat. As a farmer, while a certain standard would be meet.. there would also be a little grey market happening..  I am going to be the bad girl in this challenge LOL

Both H and I have families to feed. To keep things simple, when we prepare food that will be shared, we need only account for our ration in shared meals. For example, if I make macaroni and cheese to share with The Man using 3 ounces of cheese, I need to subtract only 1.5 ounces of cheese from my rations, not the whole 3 ounces.

Same here, hubby will join us in meals but he will also get extra’s on the side that I will not.

To comply with rationing rules, we cannot carry our ration amounts forward from one week to the next. In other words, if we did not buy our 3 ounce ration of cheese in Week One, we cannot buy 6 ounces of cheese in Week 2. However, if we do not use all our rations for the week (once purchased) we can save it. In other words, it will not go in the trash or compost once the week is over.

Since only the National Loaf was available, it will be brown bread only for us this month.
With only a few exceptions, such as Birds Eye Custard, processed foods were not available to women on the home front. This month, we will avoid the consumption of processed foods.

I have not made a national loaf yet but it will be happening this weekend.. and no processed foods.. (this really sounds like fun right?)  In keeping with my hosts of this challenge, I will be trying to take photos of our meals daily and keeping an eye on my weight as well.

2 Responses to Striving for Victory -Eating on the Ration