Posted on February 6, 2017 by Just another day on the farm

This pen normally has hay net feeder and or a single corner hay feeder.. neither of which worked for the ewe sheep that are using my big back corner stall as the nursery pen at the count down to lambing..

A little extra muscle, a crow bar an hammer and some time with a plan and we put together a nice sheep feeder that holds ten eating at the same time.. Saving costs on re-used wood, and more important, saving on hay by having a proper head space for them to eat into. Make sure if you are reusing wood, that you take out all nails or screws from the wood before working with it. 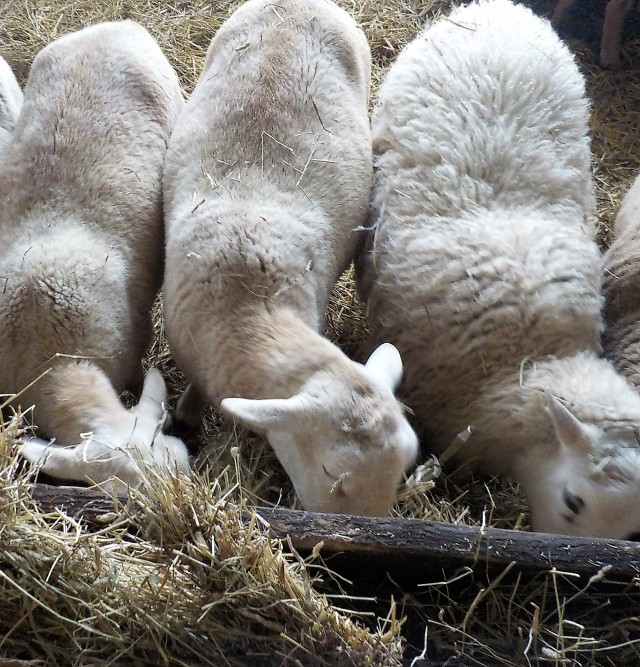 We put this at the front of the pen, this means that we can haul our hay to the front of the pen and fill this over the top, the whole thing takes 4 full chips of hay, which is right around hundred pounds of hay per fill.  As long as its kept topped up, the ewe’s can take their turns at the feeder with ease.

The ewe’s have hit the point that they are getting a bit of grain each day, just a light feeding because some of them are big enough that even with free hay in front them, they are needing the extra calories.  I also have a nice salt block right by the rubber water trough, because I know that if they take in more salt, they will drink more water.. win-win.

The ewes range in how close they are to being due and they sigh as I stand and lift tails to see bags on each one..  Its like a game.. Can I see your bag please.. no bag, little bag, getting there.. filled up..

This ewe is just starting to go from no bag, to a tiny wee bag.. We have the jugs ready for when we need to move them, I normally would not have all the girls in lock down, just the ones getting close but they say that we are going to have a big storm coming in so for this week, we will keep the girls in the big nursery loafing pen, moving as needed to the little jug and then moving to the bigger baby pen. I have learned the hard way to keep the girls in safely when we are going to have very bad weather when I have them close to their new date..  After this big storm passes, I will check each ewe and about half of them will go back out to have 24 freedom and the big lean too to coming and out of at will.. The closer ones or any that have their lambs, will be staying in for longer.

I can not imagine lambing in the deep dead of a canadian winter without having the big barn to keep everyone safe.

Farmgal Tip of the Day – For the average size sheep you want your head opening to be 9 inches.