The round bale garden has been producing now for four years and we planted them this year with a climbing bean, it will get to a certain height and then it will start to trail over and down the sides, ideally loaded with beans..

Each Bale has five holes, two bean plants per hole but the end ones that have seven..

When you dig down to make the hole, you can see that the outer rings of the bales are getting composted.. then we back fill it with compost-mixed with dirt for the planting itself, the seeds start in the dirt but very quickly, the roots are in the bale themselves..

We move the planting holes around the bale from year to year.. This was from 2013 the year we grew acorn squash in them.. not the best call, the chickens got them as they ripen that year but it was still a good learning curve on growing in the bales themselves. 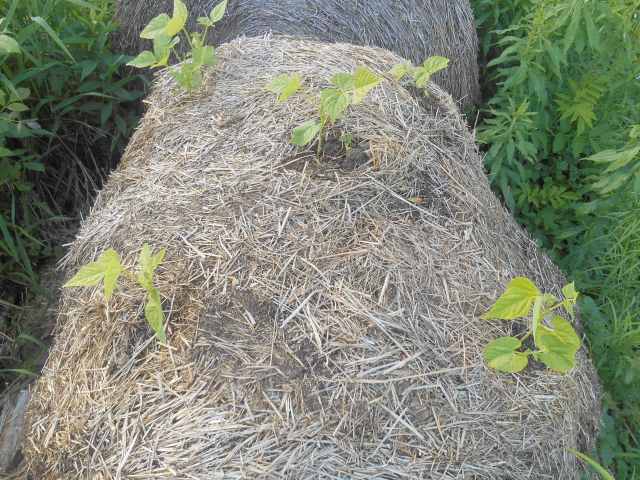 The beans are all doing very well at this time, the growth is making me quite  pleased.. but its clear that they will need a liquid feed of comfrey tea this week to give them a feeding boost.

Good thing I have a bucket brewing.. and hey, its a blog post to boot.. o Ya!

The final thing of note is that how well the bales are holding up, the small bales are considered one year good and everyone told me in the all the books, three years max on the round.. Bla.. books, I tell ya, if you have not done it yourself.. books are good jump off points but you need to get it done in order to figure out what works and what does not..

Sometimes in the homesteading books, I will see the same information given over and over and I will try it over and over, with the same results, and then I will ask friends local and then in the west to try things and after we all get the same requests, we shake our heads..

Because you know that hundreds or even thousands of folks have read it and are counting on it to work when in truth.. its very clear that it will a) only work in their climate with their tweeks that they are not aware they do or they are just not sharing it quite right or ) they just spit up the same info that they all read and none of them do it..

Its like my momma gingersnaps,  she makes kicking ginger snaps, but I never share the recipe, because if you can not be shown just how to make that special pinch when rolling them, they are hard as rocks, make  with the pinch per cookie and folks drool over them..

This entry was posted in Life moves on daily and tagged Hugelculture beds made of round hay bales, Round bale hugelculture gardening, strawbale gardening. Bookmark the permalink.

1 Response to The Round Straw Bale Garden Update June 2015