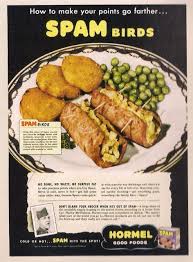 A hundred million pounds of Spam were shipped overseas during the war, and it was one of the key impacts on the home front in support of the troops,” he said Saturday. 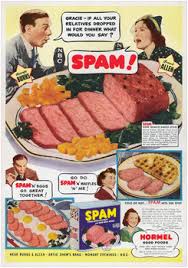 Many U.S. troops became all too familiar with the canned Hormel pork product, packaged in durable and easy to ship rectangular cans. So much so that, at times many of them found they couldn’t bear to eat another bite.
Others, though, couldn’t get enough.
“We never had enough of it for it to really become a problem,” said Bob McKee, a Palm Springs resident and docent at the museum who fought in the Pacific theater.
He said he was more often fed frozen mutton and other sheep products that came from New Zealand and Australia wrapped in giant burlap bags.
“I couldn’t even stand to look at that stuff,” he said, talking about the mutton.
Spam became a major protein source for the British, and Soviet Union Premier Nikita Kruschev said it saved the Russian Army.

now the ways it was used then compared today is quite limited but still very tasty. Folks even make homemade spam, giving control over the process.

We are going with Three Spam Dishes for todays menu, making my one can of spam get more more bang for the buck

Spam, egg with onion for breakfast 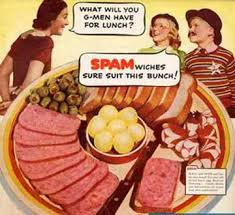 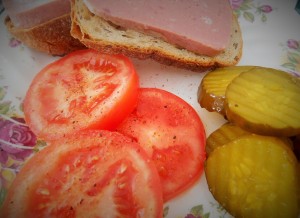 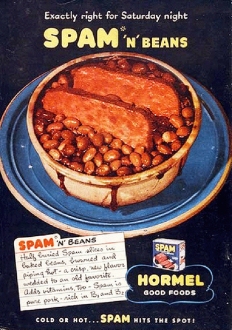 Fried Spam with beans and veggies for supper 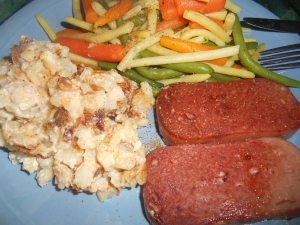 Which leads me to my first reader challenge..  you are welcome to send me recipes and or comments from your own family lore in regards to the things we are talking about..

Once a week, I will add them all, Make at least one for the post and do a Reader feedback recipe post!

I have a very interesting recipe given to me in regards to the oatmeal for breakfast, its different and I am looking forward to trying it as a breakfast during the challenge.

So tell me… do you have any long time Spam recipes in your family cookbook! Dish them on out!..