This little boy hooked my heart the moment I saw him and he came home to me.. great joy indeed.. sadly when he was still pretty young he chased a fly on the back of caleb the horse’s hoof and when caleb lifted and then put his foot down, he stepped on blue..  our free farm kitten because our rush to the vet can we save him kitten.. he did pull though but as he grew the damage to his organs showed up more and more.. sadly Blue never made the age of one before he crossed over.

Thus began my two year search for a solid short hair blue kitten.. I did not want to go buy a purebred Russian blue which would of course been the fastest way to do this..  I wanted to adopt a farm kitten (raised with kids and friendly) or adopt at a rescue. I set a budget of 200 or what I would need to do a kitten for and waited..

I found the perfect kitten and filled out the paperwork..  nope.. indoor only.. sigh..  I wrote on facebook asking my friends to keep a eye out for me..  a lovely older coming two year old female caught my eye.. but I was declined as I was honest that I already had 6 cats.. she needed a smaller quieter home..

And then I went.. its kitten season! and I flagged some of the local sites and started hunting them.. nothing.. waiting, waiting.. nothing

This was my very first glimpse of her.. look at that face! those eyes..  I wrote within two min of seeing her post and back and forth we sent messages and when I put down the phone. I had a pick up time the next day.. 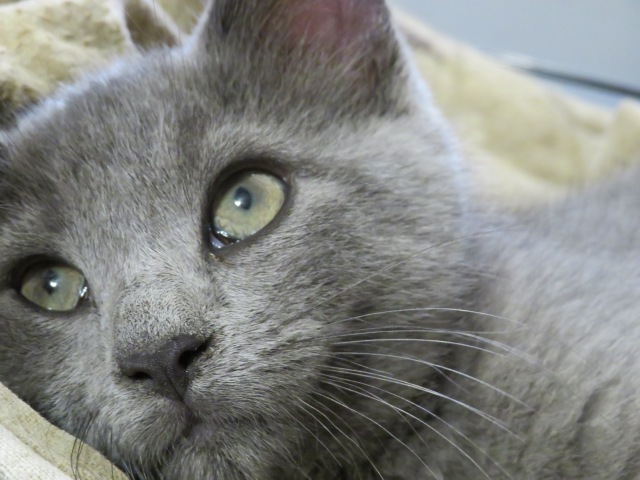 So let me introduce you to Smudge.. a stunning, purry in your face short hair smoke blue short haired female.. she is my new baby and she is a handful already..

I had high hopes that her and Miss Leeloo would become good friends.. but what I had not counted on was this little tike.. stealing my hubbies heart as fast as Smudge did mine..

Coming on the running to us with his tail right in the air as Jimmy.. O my.. hubby had liked him out of the kittens shown and he scooped him up

and they did that male bonding thing that can happen and before you could say.. boo.. Jimmy was coming home with us lol

While having the two of them IS a handful.. its a good one.. they both came litterbox trained and have been outstanding in this regard.. we brought out the kitty tower so they go in three or four times a day to get their “special” kitten food.. growing babies need a different menu then rest of the adult cats.

They will NOT be allowed outside for at least a few weeks min and then only when they come running when called on cue..  So Leeloo came in.. sniffed them.. went huh and asked to go back out and hunt..  Leeloo is a hunting farm cat.. she comes and gets one or two max min of love a few times and day and then she is busy living life.

The others were as I expected.. gentle, welcoming and sniff and done..  Its the two auntie farm dogs that are struggling..  they so want to be these wee tikes “BEST FRIEND” and these two are having nothing of it yet.. Jimmy finally did a nose to nose touch and sniff with Dezbot.. but Smudge still gives the puppies the kitten side eye..

The hounds are being so good.. they lay very still.. they are trying so hard to wait for the kittens to come to them lol..  They do adore their purr kitties so much..

At least they still have leeloo to baby LOL

And that is it! I swear.. there is NO plans to add any more cats to the farm.. these will both be fixed at the six month stage.. no heats, no spraying.. no breeding and certainly no kittens..

10 Responses to Smudge and Jimmy..