I was making a batch of Honey Whole Wheat Bread on Monday and thought.. why not make half the batch into a loaf of bread and the second loaf in size into a nice batch of bagels.

Sure its a touch extra work but not much and its such a nice change to just the sliced loaf of bread!

As you can see, the bread was made and allowed to rise, this is after its doubled in size and its ready to be worked with, I poked it just to give it some texture to get a interesting photo 🙂

Split your dough and make your one loaf as planned, let it rise and then take your other loaf and cut it into as equal as possible pieces 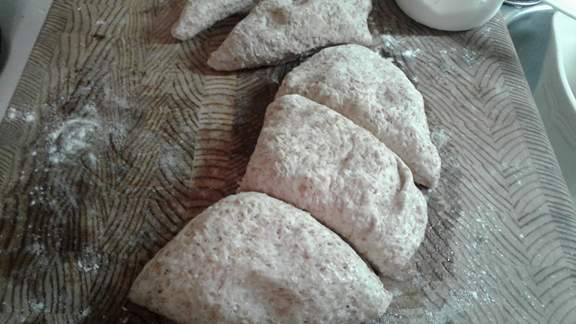 On a lightly floured surface, roll your piece into around a six inch rope

Clearly as even as possible, which is not what mine looks like LOL but I did thin the thicker end and plumped up the thinner end, roll into a circle and pinch-half twist the ends together. 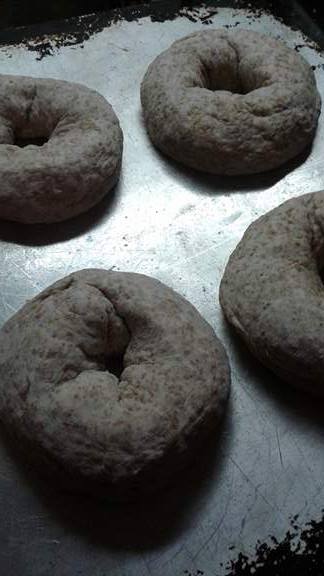 Let them rise for 15 to 20 min and in that time, you will need to pre-heat your oven, get your bowl of toppings ready if you are using them and get your large wide pot of boiling water ready. 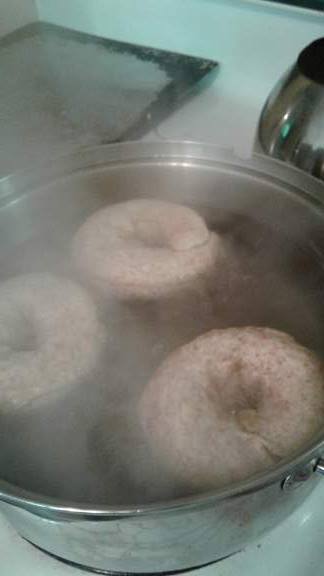 Mine was able to do three per batch, one min per side with the water kept hot and going.. I dipped mine and put a touch of salt on the tops and into the hot 400 oven they went for 12 to 15 min till cooked though and golden brown. Mine are very nicely brown on the bottom I could have let them go another three to five if I had wanted the rest to be as brown. 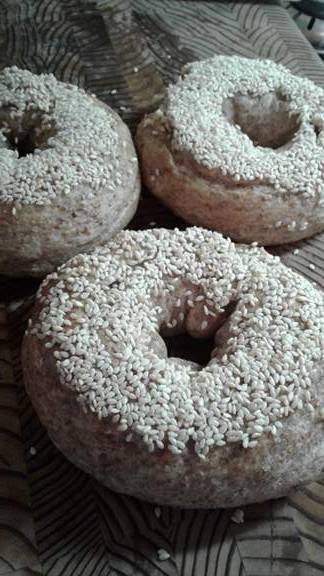 By the time I got them all done and on the cooling racks, the bread was ready to go in and start baking.

They were outstanding as my fresh Egg Salad Sandwich for lunch today! So consider next time you have a batch of bread on the go.. it’s just a bit of extra steps to treat everyone with a different bread item and the chewy texture is a nice change then regular loaf bread with that bite of salt and flavoured top