Its strange sometimes needing to change your ways, on a farm, in some ways you are always changing, always reacting to what is happening and many times it out of your control, the wind pushes the corn over a the wrong time, the storm drops that tree, the rains keep coming or they pass you by

But some things you do them by routine, using fresh veggies for my soups and stews are pretty much the norm, as is making the jar so that its a single serve..

However that does not mean that is the only way it needs to be.. so this time, I used mixed dried veggies and made a fully loaded jar, in a way I made it like the store bought ones that need equal amount of water added, but in my case, ideally you will use broth instead of water, or you will make a gravy and put some mashed over top and Voila.. Shepards Pie! 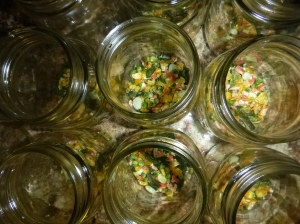 Each pint got 1 heaping tbsp. of pot barley and 2 tsp of mixed dried veggies, I had dried 2kg of mixed veggies for a presentation done on preservation and needed to use them up.

I cooked up three pounds of beef with onions and garlic and put 1/3rd cup in each jar, then topped it will beef broth and processed for amount of time needed for beef soup in pints at ten pounds pressure.

Now the perk of this that each jar is fully loaded and while be heated up with a full pint jar of beef broth, think of it as a quart of soup for each pint put up.

I also canned up 14 pounds of just pork meat for other dishes in the future! I need to start clearing the freezer of the older meat and canning it up so that I can make way for the fall’s meat.

A far amount is going to be cured, most will be canned and the best cuts will be put in the freezer for future use..

This entry was posted in beef an veggie pie, Life moves on daily and tagged Canning, presuure canning, using dried veggies in canning. Bookmark the permalink.