O what a great year for the gooseberries.. my best harvests yet, despite the fact that they need pruning and I really need to clean up and feed around them, the comfrey leaf feeding from last fall showed this year.

Last year, I did a straight cut and drop of large comfrey leaves around the gooseberry bushes.. wow, even with the drought year, they were fab! I will do the same this year, if you have never put cut comfrey around them, give it a try..

Well, because the berries were ripening at different rates, we picked and froze until we did the final picking.. which is why some of the fruit appears frosted and some fresh.. After about 70 percent was ripe, we picked the bushes clean. 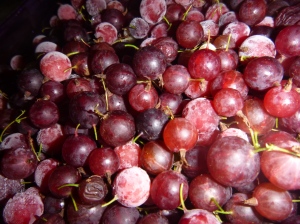 I wanted the pectin from a percent of the under ripe gooseberries and after a pick though into the juicer steamer them went, o the joy of not topping or tailing them!

At this point, I was left with skins, tops and tails and amazing juice, I measured out the amount of juice and made it very simple one to one in measurements.

however, as I wanted to add vanilla, I split open one vanilla bean and scraped out the middle an added it to the juice and sugar, I stirred till sugar was fully melted an then gently boiled till it passed the jelly sheet test on a cold plate from the fridge and into properly prepared 8 oz and pint jars it went and into water bath for ten min to finish off the process 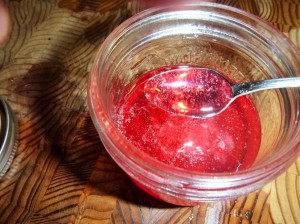 So far I am the only taste tester but yum!

This entry was posted in Life moves on daily and tagged Gooseberry, gooseberry jam. Bookmark the permalink.