Well part two of my ultra frugal plan to be able to cook food during our power outages, as well as a way to cut down on power use in regards to cooking meals. If you didn’t read up about my new little cook stove the Ecozoom, check out that post, as this one goes with to a point. 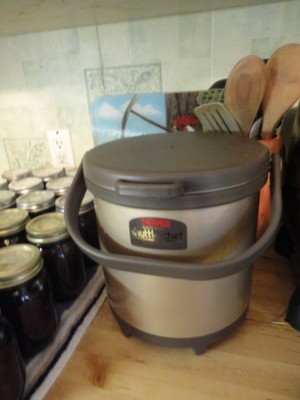 My Thermos Shuttle Chef cooker has arrived, now this is two specially made steel pots, one that gets heated and the food is brought up to a boil and or is simmered at a slow boil for up to 15 min (which seems the longest time given in any of the recipes) and then you take it off the heat and put it into your outer steel pot and it continues cooking and staying safely hot for up to six hours.

During my reseach into this idea, I had found out that it was very popular in Japan, and was being used as a way to cut energy use and still be able to cook full meals that are served hot, this is backed up by my new cookbook that came with the  gear, while I do have a english version, its been translated from their recipes.. Stewed black mushrooms with conpoys and Black Moss anyone?

So I got a fairly large shuttle chef, my inner pot can hold just over a gallon but as you are only to fill it 3/4 full, it should be able to feed a family or a couple meals for us.  My first test was as they directed with hot water, and dang, does that puppy keep it hot!  I checked it at 3 hours and 6 hours and was very pleased with the results.

My second test was to cook up four big suasages, I put just enough water to cover them, brought them up to a boil, which took four min of power on the small stove burner, and then into the shuttle chef for a continued cook time of two hours-Note, they didn’t have a cook time for this food , but as whole chickens, pot roasts and pork roasts were to get three hours, I figured it was safe to check at two hours, but it might have been done sooner?

I am having a hard time figuring out how much energy I used for my heating time on the stove, I have a rating on it for a per hour use but it does not break it down to per burner, so I can’t give a honest amount used but the average time to cook those same type of meat would be at least 20 min on the stove and at least 40 min in the oven.. either way, I used less power.

So the Ecozoom has my water boiling in 5 min with the use of half a branch worth of dead fall twigs and the leaves on the twigs, so in that case, no outside energy costs required to get the shuttle chef to its cooking point, it took about ten min from start to finish to get the ecozoom ready, heat up and on, the water done and the stove closed up and allowed to finished burning the coals and done.

I am unsure how you figure out any costs of deadfall twigs off one of my trees? but I guess you can factor in the cost of the ecozoom stove, the cost of the shuttle chef up to a point per meal till they are paid off but in any case, I am happy to have the choice to be able to cook with this, my next pot will be done on the ecozoom and I am going to try out a long cooking time item being beans or rice following the shuttle chefs cookbook on timing etc.

Update: the meat came out perfectly and was still hot enough that you needed a tong to lift them out, then I could not help but notice that the pouching water looks amazing, so I re-heated the pot to boiling, this time less then a two min to do so, and add in the right amount of rice and some seasonings and back into the outer pot it went, so I should have rice ready to go with fresh veggies with some diced in cooked meat for supper.

So what is your plan to be able to provide hot meals when the power is out? Have you added or replaced any of your cooking items to get better energy rates out of them? Anyone out there using a ecozoom to cook with, or using a shuttle chef to cut your energy use? If so, any hints or types on using this product?

This entry was posted in frugal and tagged energy reduction, Frugal. Bookmark the permalink.