Friday Around the Kitchen Table

Its Friday already and its been a bit of a crazy week here on the homestead. Not because of the farm, it’s just steady as she goes there but because hubby is extra busy at work.. Once again he worked overtime hours on the weekend and during the evenings and he was on last bus a few times plus yesterday on Friday, he could not even make the bus, he had to get a taxi chit to get him to the commuter parking lot.  Add to this that it would appear that he will be traveling at some point this month for work as well.

It just means that I have more time alone on the farm (not a bad thing for getting things done really) but for things that require hubby’s help (two people jobs) we are having things happen slower than I would like while getting ready for winter.

So Hip Roof Barn did a post on the fact that its smoke alarm safety month, a reminder to check your smoke alarms, change your batteries and if your alarm is older than 10 years to replace them. 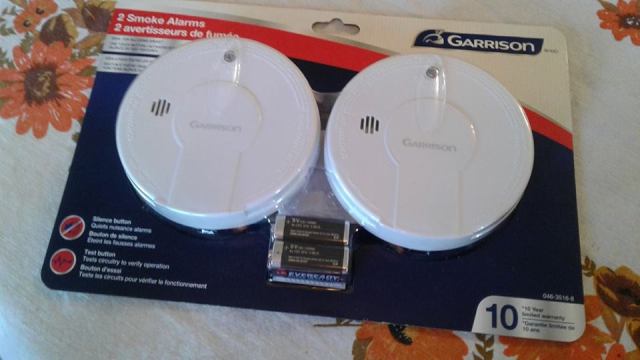 While my smoke alarms are working when tested, two of them are 14 years old, so I decided to do both 🙂 I have gotten a two pack of new ones (that have a 10 year warranty) to replace the oldest ones but I am not going to waste the older ones.  They just got moved to a new area in the house..  So I meet the challenge to replace over ten years in age, but I also did not add waste and will continue to use the older ones till they no longer test as working.

So I will ask my readers to do the same.. Please check your smoke alarms and if you can’t honestly say when was the last time you changed the battery, consider putting in a new one.

Ottawa Tornado (all SIX of them) hit one month ago and yesterday they said something on the news that caught my ear..  For those that had insurance (and lots of folks did not) it was the largest natural disaster that has to date been listed as costing the insurance companies 300,000 Million dollars. This is considered to be the most costly Climate “event” in Canada to date.

The province says they will give a certain amount of money to those that did not have private insurance. I am grateful for that current program so that everyone will get at lest something to give them a hand.  I think it just now starting to really sink in for many folks.. that it will not be done in a day, a few weeks or even a few months.. that it will be years for many if they even rebuild.  Some will move on to a new place, a new home, a new community..  many will not.. they will stay.. they will rebuild in place.

Either way it will not be the same.. It got me thinking a lot of “being prepared” and I am big on being prepared, having water stored, having a way to get more water, having a pantry, having a good amount of food in many ways put up, in having extra’s.. Extra fire wood, backups on ways to heat/cook, extra boots/extra jackets. Extra 2 by 4’s and extra sheets of plywood and so much more. Just in case.. Just in Case!

However all week-long I have been pulling at, worrying at something C5 has been talking about for a good while yet (there are others that have touched on it as well)

Adapt in place..  It hits a cord for me.. now don’t get me wrong.. we all need to be flexible enough to know when to fish or cut bait.. movement in life is critical. When you are told to get up and move.. MOVE.. be it fire, be it storm, be it a hundred other things..  Goodness knows I have moved enough in my life to understand that.

However no matter if you are staying or if you are dealing with the effects of moving.. you still need to adapt in place..  No matter if it’s just shrinking buying power or if its reduced work hours, or health related issues or XYZ..

At least so far, for most of us and I think for those that read this blog, we are still either treading water or we have our heads well above water. It’s about how you are going to deal with what is happening, all the little things that are adding up. Lets just stay with total basic’s right now.. Food Costs, Power costs, Heating Costs.  Have you noticed that the basics costs are having small but very real steady increase costs while the “extra’s” are so cheap, you can buy “distract items” at lower and lower costs.

I will warn now that I will be coming back to this idea..  But like always, I want to also keep it moving forward, keep it active..

So here is my question for you? What is the one thing you are feel you are working on right now that is helping you Adapt your life at the moment? Is there something you are changing to give you more flexibility in a different area?

Our focus this week has been about prepping the house for the coming cold, we are taking steps and investments to increase our ability to remove drafts/build more insurance in keeping the heat in our home.   The weekend will be spent on projects related directly to this.

13 Responses to Friday Around the Kitchen Table