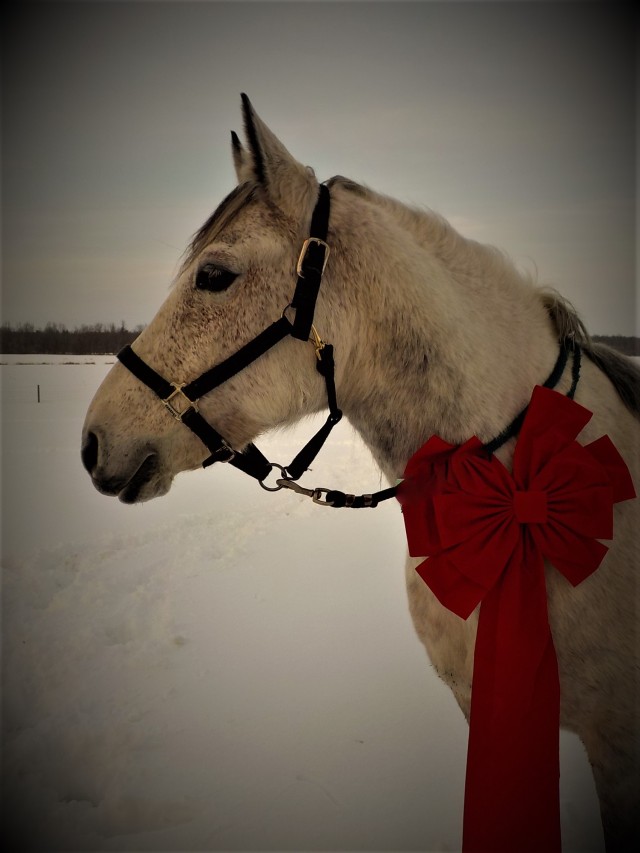 It was Christmas Eve.
The air was very cold.
Strong winds blew clouds across the dark sky.
Snowflakes fell and drifted across the ground.
All over the world, children tried to sleep.
It was very hard because they were excited.
They knew Santa Claus and his reindeer were flying their way.
Soon everybody would have presents under their Christmas trees!
But up in the sky, Santa was worried.
The wind made it hard for the reindeer to fly.
The snow and the clouds made it hard for Santa to see.
Santa and the reindeer needed to rest and warm up!
Down through the clouds came the reindeer and the sleigh.
Santa saw a little farmhouse and a big old barn.
Beside the barn, there was a bucket of warm water and bale of hay.
It would be a good place for his reindeer to rest
On the ground, in the barn, were Aunty Val and Uncle Jason.
They were checking on the sheep, and Bojangles the horse, and Miss Piggy.
They thought one of the sheep might soon have lambs.
Aunty Val and Uncle Jason wanted to make sure they would be well.
When they heard jingle bells overhead, they ran out to look.
They watched Santa, the reindeer, and the sleigh land on the ground.
Santa hopped out and said, “We are tired and cold from all of our flying.
Could we stop for a short rest on your farm?”
Aunty Val said, “Yes, Santa, of course you can!”
Uncle Jason said, “Your reindeer are welcome to eat some hay and drink some water.”
They helped Santa take the harnesses off the reindeer.
The reindeer gathered around the hay bale and began to eat.
The reindeer were happy, but Santa was worried.
Santa said, “The reindeer need this rest, but it means we will be late.
“I do not think we will be able to visit everybody’s house tonight.
“If only there were some way for me to keep flying!”
From the barn came a clatter, and out came Bojangles the horse
He trotted over to Santa, Aunty Val, and Uncle Jason.
Bojangles nuzzled Santa’s hand and asked, “Neigh?”
He had heard Santa, and wanted to help.
Santa smiled and said, “Thank you, Bo you are a wonderful horse.
“You are big, and strong and kind and gentle.
“But I have never see a horse fly – can you?”
Bojangles shook his head, and quietly said, “Neigh…”
Aunty Val asked, “Santa, how do your reindeer fly?”
Santa answered, “The reindeer harnesses are magical.
“They allow the reindeer to fly and laugh and sing and talk.”
Aunty Val smiled, because she had an idea.
Aunty Val asked Uncle Jason to get the reindeer harnesses.
“Can you make them fit Bojangles the horse?”, she asked.
“Yes”, Uncle Jason answered.  “I can make some fit Bojangles”
He adjusted the harnesses and placed them on Bojangles .
Bojangles looked at Aunty Val, Uncle Jason, and Santa.
Bo said, “Does this mean I can talk?”
And then he laughed and kicked his back legs.
And everybody else laughed with Bo the talking horse.
Aunty Val said, “Come, Bo, I will teach you to fly
“That way, you pull Santa’s sleigh through the air.
Bo answered, “Yes, Mama, please teach me
“So I can help Santa give presents to all the good girls and boys.”
Aunty Val put a leash on Bo’s magical harness.
She held on while Bo took a small step into the air.
The bells on Bo’s harness jingled and jangled.
Bo squealed with excitement.  “I can fly!”, he shouted.
Bojangles flew in small circles around Aunty Val. The reindeer stopped eating and watched the flying horse.
They nodded with approval and went back to the hay.
Santa smiled and said, “Very good, Bo, let us go!”
Bojangles came down to the ground and ran to the sleigh.
Uncle Jason helped Santa join his harness to the sleigh.
Aunty Val said, “Be good, Bo, and fly safe.
“And say Merry Christmas to all for us!”
Bo pulled Santa’s sleigh into the air.
They climbed high above the farm and turned west.
They delivered presents to boys and girls as they went.
Soon they descended towards Grandma’s house.
“There is Grandma’s house!”, Santa said.
Bo led the sleigh down toward the house.
They landed on the roof with a thump!
Santa grabbed his sack of presents and jumped down the chimney.
Santa saw that Grandma had a beautiful Christmas tree.
He placed all the presents for Grandma around the tree.
He placed presents for the nieces and nephew around the tree.
He paused to enjoy cookies and milk and then jumped back up the chimney!
Santa said to Bojangles, “You have worked hard and done very well.
“I will be able to deliver everybody’s presents tonight because of you.”
Santa added, “But I am sure my reindeer are feeling rested and ready to fly once more.
“So let us go back to Aunty Val and Uncle Jason’s farm.”
Bo said, “I am very glad I could help you, Santa.
“I will take you back to the farm, but I must do one last thing before we go!”
Bells rang as Bojangles pulled the sleigh into the snowy night,
And he shouted out, “Merry Christmas to all and to all a good night!”

This entry was posted in Life moves on daily and tagged Bojangles saves christmas. Bookmark the permalink.